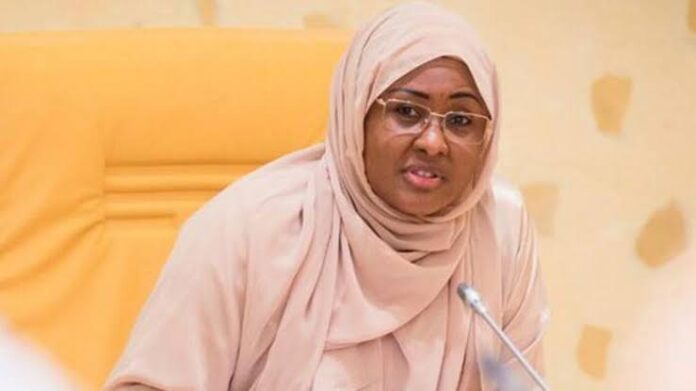 The controversy triggered by the reports that the First Lady, Mrs Aisha Buhari, has relocated out of the country took a new twist on Tuesday.

This comes as Mr Aliyu Abdullahi, the Senior Special Assistant to the President on Media and Publicity (Office of the First Lady), refused to disclose Mrs Buhari’s whereabouts.

Rather than respond to the question he was asked during his appearance on Politics Today, he told Channels Television’s Kayode Okikiolu that he was not invited to the show to discuss the privacy of the first lady.

“I am sorry, Kayode, this is not part of what I was actually invited here to discuss in your studio.

“I will not be speaking on that because it is not part of what we agreed for me to come and discuss. So, let us leave that issue out of the interview please,” Abdullahi said.

She Is Entitled To Her Privacy
In his response, Kayode informed the first lady’s aide that the news was already in the public domain and it was important to clear the air on the controversy trailing the issue.

He also told Abdullahi that the information he would provide would help Nigerians make informed discussions should the issue come up again.

The first lady’s aide, on his part, maintained his earlier position, insisting that Mrs Buhari was entitled to her private life.

He said, “Let me say it this way again, the first lady, although married to the President, nevertheless, she is a citizen of this country who is entitled to her own right to privacy.

“If she chooses not to speak on a particular subject at any point in time, she is entitled to her own right to privacy and that is where I wish to leave that issue as of now. That is her own right, and she did not choose to speak at this time.”

Abdullahi appeared as a guest on the Channels Television political programme about two weeks after an online news agency reported that Mrs Buhari had moved to Dubai, United Arab Emirates.

According to the report, the first lady left Nigeria in September after the wedding of her daughter and does not plan to return to the country anytime soon.

Mrs Buhari reportedly claimed that the Aso Rock Villa was no longer secure for her family, following the shooting incident which occurred in June.